Hololens for Business: Effective Ways to Capitalize on Mixed Reality

Hololens for Business: Effective Ways to Capitalize on Mixed Reality 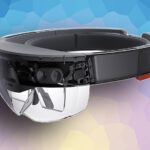 You’ve heard of augmented reality (AR) and no doubt you’ve heard of virtual reality (VR) but what do you know about mixed reality (MR)? Mixed Reality is one of the latest innovations in tech and will undoubtedly grow exponentially in the years to come.

So, how can you get onboard early and start to capitalize on MR now? Read on to learn how you can use mixed reality in your business with the Microsoft HoloLens.

What Is Microsoft HoloLens?

The Microsoft HoloLens is a pair of mixed reality smart glasses. It’s an untethered device with its own onboard computer, speakers, transparent holographic lenses, and more. The first HoloLens was launched in 2016, and it left a lot to be desired.

It had a limited field of view (FOV), and it was uncomfortable for many users. In addition to these issues, it also required awkward hand gestures to use, which meant it felt less intuitive.

People have long wanted holographic projection and mixed reality devices, especially for everyday use. However, the HoloLens didn’t deliver what many were expecting. The steep price tag didn’t help either, as the development edition cost $3000 and the commercial edition was $5000.

Now, this isn’t to say the first HoloLens was a failure. Sure, it wasn’t amazing, and it didn’t blow everyone’s minds, but it did pave the way for something better. After all, every technological marvel we enjoy today was built on discoveries before it.

With that being said, Microsoft has since launched the HoloLens 2. It’s better in nearly every way than its predecessor. Notably, it has:

While the HoloLens is a great piece of technology, it’s also revolutionary and definitely something we’ll look back on in the years to come.

However, it’s not for everyday consumers. You won’t see people walking down the street with a pair of HoloLens the way you would see people with the newest iPhone.

The HoloLens is strictly for commercial use. Microsoft designed and marketed it as a commercial product and given its price tag, it makes sense. The HoloLens 2 was launched in 2019 and costs $3500.

It was built to help those who could benefit from having a “hands-free computer” while working. The Microsoft HoloLens has been shown to benefit those working in manufacturing, healthcare, and education.

AR, VR, or MR: What Does The HoloLens Provide?

Augmented reality, virtual reality, and mixed reality are three technologies that have seen heavy investment in recent years. This is due to Tech giants seeing the future with AR, VR, and MR woven into our everyday lives.

These technologies fall under a blanket term, Extended Reality (XR). The X in question represents a variable that can be replaced by any of the current or future extended reality technologies.

Augmented reality is the real world overlaid with virtual objects. This was popularized in the mainstream with mobile games such as Pokémon Go by Niantic. It has also seen further development and mainstream push with Apple’s ARkit and Google’s ARcore.

Virtual reality is when you’re put into a fully virtual environment with no input from the real world. Think VR games such as Spider-Man: Far From Home VR Experience or Microsoft Flight Simulator.

Mixed reality is like a fusion of the two because it’s an interaction of the real-world and virtual objects in it. One of the best examples of this is the use of Microsoft’s HoloLens. While you’re “cut off” from the real world with VR and you can’t fully utilize virtual objects in AR, you have the best of both worlds with MR.

How The HoloLens Can Benefit Your Business

The Microsoft HoloLens has been proven to be invaluable for businesses across a variety of sectors. While the initial investment can be steep, the pay-off is undoubtedly worth it when you consider the time saved and increase in productivity and efficiency.

How Healthcare can Use AR, VR, and MR

One of the major benefits of the Microsoft HoloLens for healthcare is how it can connect you in minutes with a remote expert.

This feature allows you to facilitate real-time consultation. With the HoloLens’ unique interface and Dynamic 365 remote assistance, you can share your view with the expert and have both hands free to follow their directions.

Here’s an example of how the HoloLens is used to facilitate remote collaboration amongst surgeons around the globe:

How Manufacturing can use AR, VR, and MR

The collaboration features of the HoloLens work great, especially for those in manufacturing and design. Often when working with complex machines and processes, such as automobiles or even toy manufacturing, it’s important to see this in 3D.

This is because it allows you to better visualize all the moving parts of your creations and remedy any possible problems that may arise during design and testing. The HoloLens 2 also allows you to better share your designs and ideas, as well as collaborate with others.

Lockheed Martin has shared a 90% increase in productivity since introducing the HoloLens 2, which is nothing to sneeze at. With numbers like those, any company would benefit, as increased productivity would equal a better bottom line.

How Education can use AR, VR, and MR

Healthcare and manufacturing aren’t the only sectors that have seen demonstrable proof of the magic of the HoloLens 2. While mixed reality is still in relatively early stages, the results are more than promising that this technology is making waves.

For example, Northeastern University uses the HoloLens 2 to reduce training time from 3 hours to 30 minutes. This is thanks to the Dynamics 365 Guides that the HoloLens provides, and is only one example of the application of the HoloLens.

Its benefits to education cannot be understated, especially for training in medicine and other fields of science.

Should You Invest in a HoloLens?

The Microsoft HoloLens is currently unmatched on the market when it comes to mixed reality. If you’re in education, healthcare, manufacturing, or design, then your business could undoubtedly benefit from this device.

You can cut costs, increase productivity and efficiency, as well as usher your business into the new era. Mixed reality is going to become even a bigger part of our lives as the years go by, and it’s better to be on the train going into the future than behind left at the station.